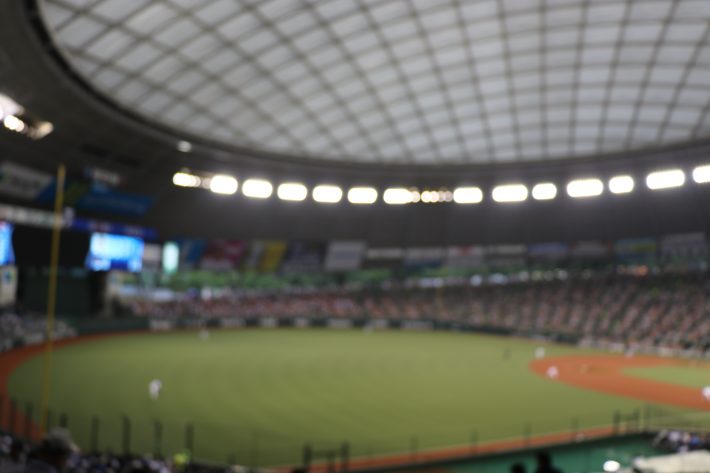 It seemed that the only familiar things were the field and the crowd; everything else – the food, the cheers, the balloons – were so unfamiliar to me, making it seem out of focus.

Let me start off with saying, WOW. Baseball games in Japan are like no other. On our first open day in Tokyo I got to experience the Seibu Lions playing the Tokyo Giants at Seibu Dome and I definitely have no regrets. I’ve never been to a baseball game in America, so the closest thing I had to compare it to would be my high school’s baseball games and it beats that by a long shot!

Getting to the game

The whole experience started once we got onto the Seibu line at the subway station. It just so happened that the subway train we got onto was Seibu Lions themed! It had baseballs on the floorboards and even had Seibu Lions graphics on the outside of the train as well as on the seats. This train took us directly to the Seibu Dome, where a giant blow-up of the mascot greeted us!

Getting our tickets and finding our seats

Buying tickets to the game was pretty much like anywhere else. It’s the concession stand next to the ticket box that I found interesting. Usually, in America, our concession stands include hotdogs, burgers, nachos, etc. and while some of the students were able to find some type of hotdog/burger stand, this stand happened to be “Baseball Bento Boxes.” For those who don’t know, bento boxes are multi-compartment trays that contain a variety of meats, veggies and rice. Some of the boxes were player-themed and included their cards when purchased. I simply loved the idea of this!

After receiving our tickets, we headed through the gates and into the giant dome to find our seats. Inside was just as amazing as outside. The vast open-air dome was lined with different styles of food and drink stands, complete with a team gear stand as well. Once finding our seats, it was time to prepare for the game!

Dylan Knight and Katharine Robertson ran into the Seibu Lions mascot while searching for food!

The game and more

The game started off with both teams’ cheerleaders and mascots coming together on the field to perform a routine together. I thought that was pretty awesome since most sports games I’ve been to, the teams had separate dances. Then, the fun began! Instantly, I was shocked because, even though it was a sports game, it was still somewhat quiet. We found out that their main way of cheering was with the respective teams’ flags! Every time the cheering began, the rows of bleachers would turn blue with all the flags being out, and they even had individual chants for each player, adding to the fun. Jon Zmikly, program assistant and senior lecturer in the School of Journalism and Mass Communication, had a lot of fun making friends with the dedicated Seibu Lions fan sitting next to him and learning how to say the chants.

The real fun happened once the sixth inning ended. Out of nowhere, all these oddly shaped blue balloons appeared and were being waved around the dome. They were then released when we least expected it, making high pitched noises and flying all throughout the dome. It was definitely a sight to see and luckily you can!

The end of another adventure

Sadly, the home-team =Lions lost 9-4 to the Tokyo Giants, but it was still a fantastic experience to have! We ended the day with Dr. Martinez (whose mother was from Okinawa, Japan) successfully finding the Seibu Lions jersey of Hotaka Yamakawa, who hails from Okinawa, making this amazing and fun-filled day complete.