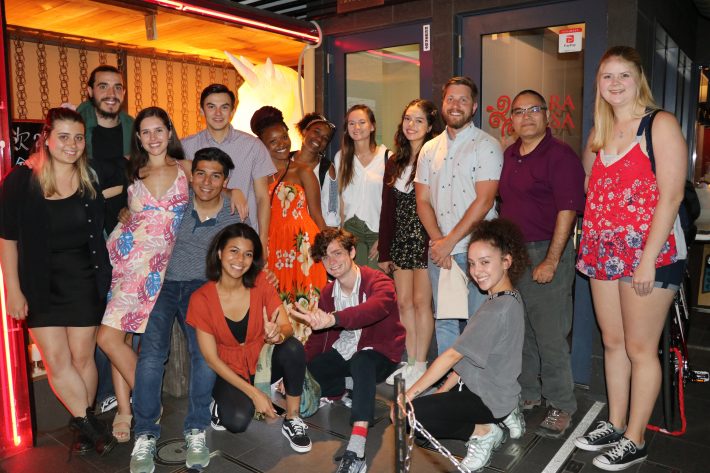 Tuesday was our last full day in Kyoto for the SJMC Japan trip. It is crazy to think how fast this trip has gone by, but before I get all sappy, let’s check out and see what students were up to on this open day.

A wonderful thing about where we were staying in Kyoto is the fact that Universal Studios Japan is a short train ride away. Dylan Knight, Emilee Hall and Katharine Robertson decided to spend their last day riding roller coasters and chilling with their favorite characters at Universal.

For those who preferred a little less excitement and a little more knowledge, the Kyoto Samurai & Ninja Museum was the perfect place for myself and two other students. This experience included learning about ninjas, throwing shurikens (ninja stars) and a guided tour through the samurai museum.

Upon checking in, we were instructed to go up a few floors where we met our teacher and two families for this activity. He handed us official ninja headbands (official to us anyways) and then proceeded to tell us how ninjas would use a plant called caltroup to stop enemies with its dried up thorns. We were then all handed shuriken and allowed to begin our training as deadly ninjas.

What ninja only has one method of attack? We then got to try our hand at using ninja blow guns with poisonous darts (or so we imagined), aiming for a super tiny red circle. Many of us found this a lot easier to use compared to the ninja stars and enjoyed a competition to see who was the best. Sadly, none of us from SJMC Japan succeeded, but we tried our hardest.

After handing in our headbands and ending the hands=on activities, we then learned about the history of the samurai and got a chance to look at samurai armor and swords. During the lesson, we learned about Iemitsu Tokugawa, the grandson of the first shogun of the Edo Period, Ieyasu Tokugawa. Iemitsu Tokugawa built Nijo Castle which the SJMC group had visited the previous day.

All good times must come to an end, sadly. We celebrated the end of our program with a traditional Japanese dinner featuring such dishes as okonomiyaki (a savory pancake), salad, cabbage steak, tofu and noodles with octopus. Upon arriving, we were greeted with a big, bright unicorn before we headed to the basement.

Students eagerly sat down and began chattering with one another. Among the things I heard several times were “I can’t believe how fast this trip went by,” and “I’m not ready to say goodbye to Japan and y’all.” Even so, many in our group talked about the western food they missed such as hot pockets, Fuego Tortilla Grill in San Marcos and hot Cheetos.

And with that, our last night in Japan was over. I think I speak for all of us when I say 11 days were not enough, but as Jakob Rodriguez said, “We all had things we wanted to do, and I’m pretty sure we all did them.” So maybe 11 days were actually enough.