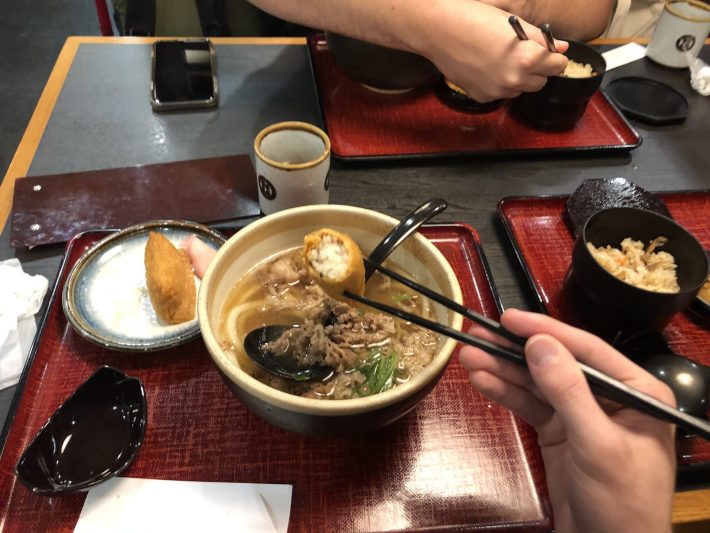 While on a quest to find sumo wrestlers in Tokyo, a small group of students tried this famous soup in Sumida. Chankonabe is a traditional sumo stew that consists of various vegetables and protein. It’s quite delicious, but don’t eat too much if you don’t want to gain any more weight. Traditionally, this meal is used by the wrestlers to bulk up so that they can be strong enough to take down their opponents in a match. Some of the students said that they could feel their muscles begin to grow like the Incredible Hulk after finishing the chankonabe (just kidding)!

2. Love that chicken from Tokyo.

I really hope that you read that subtitle in the tune from classic Popeye’s commercials. It was day three of the Japan trip, and I had gone too many days without eating fried chicken (meat that I consume almost every day in America). Morale was low without my fried chicken fix; I was on the hunt for the crispy, flaky, tender goodness. Luckily, in a small restaurant in a fancy corporate business building where my classmates and I toured the Tokyo bureau office of The Wall Street Journal, I found what my heart was longing for. I had the best and tastiest fried chicken in all of Tokyo (I’m so dramatic, but please, believe me: this chicken was amazing). I still haven’t stopped thinking about it. The hot chicken sat on top of cold udon noodles. The noodles weren’t my favorite, but the chicken, now, that was a different story. Once you dipped the meat in some warm soy sauce, your taste buds were practically in heaven. I highly recommend trying fried chicken in Japan.

3. Break me off a piece of that Kit-Kat bar.

If you didn’t know this already about Japan, well, now you do: Japan loves Kit-Kats! Luckily for me, I do, too, and there was an abundance of this crispy, chocolaty candy bars! So, I decided to try a few different flavors while traveling in Tokyo and Kyoto: sake, matcha, strawberry cheesecake, and white chocolate. I immediately knew I was going to like the cheesecake and chocolate flavors because those aren’t too wild for my American taste buds. I had no idea what the sake and matcha flavored Kit-Kats had in store for me.

Spoiler alert: they were delicious. Sake was quite interesting because it had a faint taste of alcohol in the coating around the candy. I’m not sure if many people would like that, but the flavor wasn’t bad at all! In fact, it was really good. However, my favorite out of all four of the Japanese Kit-Kat bars had to be the matcha-flavored ones. They were SO DELICIOUS. I thought they were going to be gross, but they were sweet and almost reminded me of vanilla. If you can get your hands on a box of these amazing matcha treats, do so.

4. Not too hot; not too cold. The perfect tempura.

I don’t know about you, but I love fried foods. Tempura is the Japanese version of deep-fried vegetables and seafood, and it’s mighty delicious. This might have been my all-time favorite meal in Japan. I had shrimp, sweet potatoes, other vegetables. If I’m being completely honest, I’m not quite sure what the names were of the other vegetables I was eating, but they were delicious.

5. Drinking coffee with a twist.

My favorite beverage that I had in Japan was a cappuccino at the Nissan Crossing in Ginza. Grant Langford and I decided to visit the coffee shop as we shopped in the surrounding area. The barista took a photo with an iPad and uploaded it to a special espresso machine. Next thing we knew: Bravo! Our faces on top of our beverage. It did feel a little strange drinking out of a glass that had my face on it, though.

My favorite meal that I ate in Japan was this bowl of (I think) pork ramen. Grant Langford and I found the restaurant as we walked through a train station near Ginza. The menus were entirely in Japanese, with no English counterpart. Grant and I pointed out what we wanted to eat, and hoped for the best. We were not disappointed!

7. Tentacles from the market.

My strangest, yet favorite snack that I had on the Study Abroad trip was a skewer of octopi. I shared the dish with other daring classmates in the Tsukiji Outer Market. The meat was chewy and seasoned heavily. I am typically not a fan of seafood, yet do not regret branching out while on this trip. The seafood was sensational.

I had no idea that the land of the samurai would have such an iconic and authentically American food. Hanging out just in the store front after a day taking in the sights and wandering into shops near the marketplace, you can find some beef franks dressed with mustard and ketchup. I had mine with a soda cream float to cool off on a hot day, it had what the menu called “soda” ice cream in it and a lemon-lime carbonated soda.

This entire set of noodles, tea and rice, cost about 1,500 yen (about $15 USD) in the business district and anyone with us on our excursion will tell you that they probably would have spent 1,500 more yen on it. Sandwiched between the visit to the Tokyo office of Edelman and The Wall Street Journal bureau tour, we hopped into this small shop with a line out the door so we knew it had to be good. Served in a pork broth, I licked my plate clean.

Being a broke college student in Japan does come with its advantages. As advertised, the convenience market and vending machine capital of the world did not disappoint. Between a few late nights out and even later nights writing, this is where the majority of our in-between meals and snacks came from to help us power through our days and nights. Pictured below is a picnic I had in Kiba City Park with a small sandwich, chips and Kit-Kats!