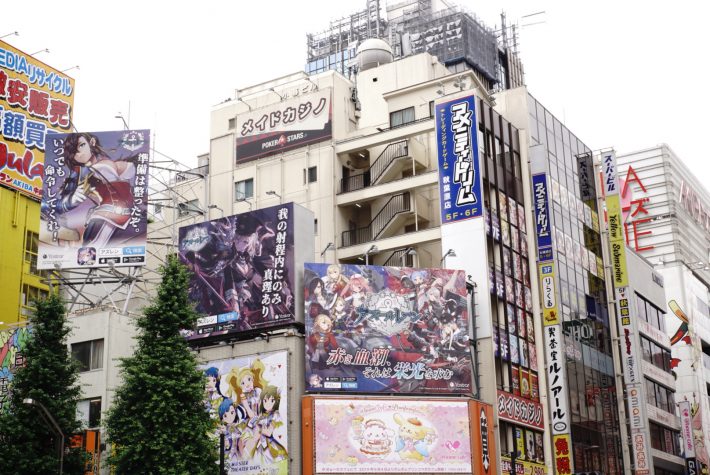 Japan is full of sugoi (amazing) surprises. I mean, a lot of surprises. Traveling to a new country will definitely put you in a culture shock. I was ready to dive into a new culture and learn more like every other student on this trip, but some things I was not expecting. For example: a giant pink man at the top of Tokyo Tower, a Thomas-the-Train-themed bus, a talking Hello Kitty and more! Most of things I’m about to mention either gave me a little laugh or I was completely blown away. And what better way to show you the quirks of Tokyo, Japan, than through this simple blog post!

Tokyo Tower was one of the most memorable places, not because of how high we were off the ground or that we could see the edge of Tokyo and people living their everyday lives. Nope. It was the Pink Man. When first reaching the top, the first thing you see is this man doing weird faces and poses. He smiled, waved and said thank you and hello in almost every language (Google Translate better watch out! There’s a new sheriff in town!). Granted, it did not look like he enjoyed his job very much, but I’m more than grateful that he put all of his energy into making people smile. I just hope they give him a raise and a well-deserved break!

Yup. You read that right: a Talking Hello Kitty. Just what I needed: a talking doll to help me go to sleep at night. I found this little Hello Kitty at a souvenir shop. You speak to the Hello Kitty and it speaks right back to you. Of course, I used this opportunity to speak memes into it.

I was immediately turned off by looking at this sandwich. I’ve heard of spaghetti tacos and even those seem repulsive to me, but a spaghetti sandwich?! Here’s the thing: I saw this and was, of course, disgusted, but then I thought about how we eat bread with our spaghetti, so what difference did it make? None. So moral of the story is, “Don’t knock it till ya try it!”

It’s no secret that I’m a little bit of an anime nerd. Akihabara blew my mind! There were billboards of anime characters everywhere! Every billboard was colorful and filled with all of my favorite characters. There were arcades, souvenir shops, you name it! I even saw a few people in the Mario Kart go-karts racing down the street.

I found this in a public bathroom in one of the shrines we visited. And I continued to find plenty more signs similar to this one. I immediately sent it to all of my family! I’m not sure who sits on a toilet like this, but nonetheless this picture on how to sit correctly on a toilet had me laughing for days!

Visiting the countryside is what made me fall in love with Japan and want to travel back again. There’s something breathtaking about looking at the rice fields and the architecture and history of every house that just blows you away. It was a stark contrast to the bustling and busy life of Tokyo, compared to the quaint countryside. I could’ve walked around here for hours. It was as if I had found a forbidden gem.

On our way back from Mount Fuji, we rode in a Thomas-the-Train-themed bus. That, in itself, was a bizarre experience, as there were no children around late at night. Plus, I was tired from walking up to the top of shrine in pouring rain. We were all soaked arriving on this bright blue bus with smiling trains looking at us. I could’ve been completely exhausted and maybe a little bit hysterical, but I found that bus amusing and comforting at the same time.

141-yen-a-gallon (about $1.31 USD) gas prices made me want to move to Japan. My jaw nearly dropped to the ground when I saw these gas prices. What do you mean, I don’t have to pay $2.30 USD per gallon? It looks like I have no other choice but to move out of America and to Japan.