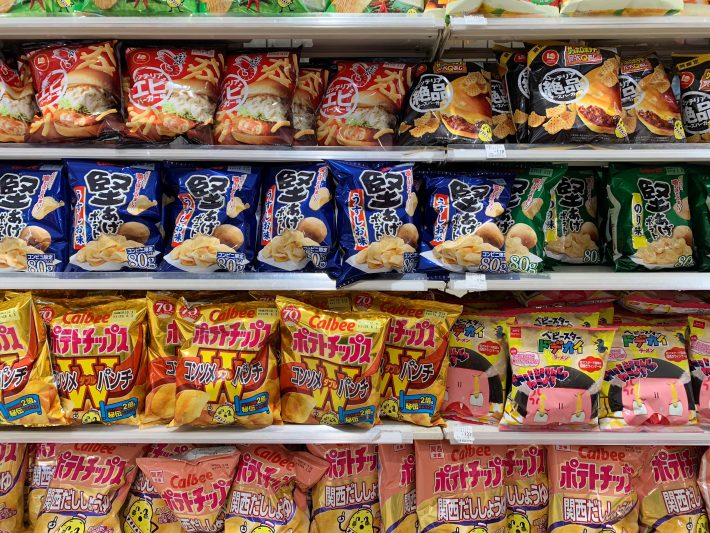 In Japan, convenience stores, or konbini, are a cornerstone in society. With many open 24 hours a day, and seven days a week, they provide a variety of goods to customers whenever they need it.  7-Eleven, FamilyMart, and Lawson make up the vast majority of the 50,000-plus convenience stores that exist across the country. To an American, convenience stores might be reminiscent of gas stations and truck stops. The food at a convenience store in the U.S. typically isn’t all that appetizing, and you mainly go for snacks or a bathroom break.

Trust us when we say that experiencing a 7-Eleven in the states is vastly different than trying one in Japan. People visit these shops more regularly, and they play a huge role in daily routines of Japanese people. These places are your one-stop shop for food, drinks, and necessities you might find at a drugstore. We were lucky to buy and try a variety of foods and other goods. I can tell you about our favorites from each store.

FamilyMart is the second largest convenience store chain behind 7-Eleven, and is the only franchise out of the top three that is native to Japan. Conveniently, there was one was located inside the first hotel we stayed at. Given that it was open 24 hours a day and had an ATM, we went there pretty often.

The gyoza/potstickers (or whatever you want to call it) that was offered tasted a lot like what you would find at a well-established restaurant. Heated up or not, it made the perfect midnight snack. Hot food was available at the register, and cashiers warmed up the items after purchase. The chicken thigh skewers glazed with soy sauce were another FamilyMart highlight. It was served on a skewer and had a taste similar to teriyaki chicken. When the breakfast buffets at the hotels started feeling played-out, the baked goods aisle quickly came to the rescue. Another favorite at FamilyMart was the onigiri (rice balls). If you are familiar with Pokemon, it’s the triangle shaped rice balls Brock eats. The tuna mayo combo was a hit with us for breakfast or dinner and anywhere in between. They served large cheese danishes that were tasty and actually really substantial. It was also notable to see Japanese magazines and manga for sale here.

7-Eleven is probably the most well-known of the so-called “big three” we’re mentioning here. Originating in the Texas, these stores can be found in 18 different countries. In 2018, the number of 7-Elevens in Japan reached a whopping 20,000. For comparison, the U.S. only has around 8,500.

The fried chicken at 7-Eleven has KFC’s beat by a long shot. It was truly something to remember and I ate it before I could get a picture of it. We also found chips and other snacks that had some pretty interesting flavors. The shrimp-flavored Pringles were up for debate as far as whether or not we actually liked them. They’re sweeter than they are salty, and have a hint of shrimp that goes away pretty quickly. Being a fish-flavored chip, they’re kind of an odd concept, but definitely worth the try. The egg-salad-sandwich-flavored Pringles, on the other hand, were decidedly not a hit. The drugstore necessities like toothpaste and bandages also helped us along our journey through Japan. It goes to show how much variety they pack into one little store.

Lawson is the last store and the third largest of the convenience store chains. Starting in Ohio in 1939, the store was originally opened to sell milk from the nearby dairy plant. This explains the bottle of milk that can be seen on their signs. After a series of business dealings and negotiations, the company moved to Japan and started opening its first Japanese stores in the mid-1970’s. They have since returned to the U.S. with two locations in Hawaii. Lawson also features two different types of stores; the regular Lawson and Natural Lawson that feature healthier options for the same price, which is why it’s almost like the Whole Foods of convenience stores.

Although Lawson boasted milk sales back then, their pastries are where it’s at. For breakfast, we got one pastry that was filled with whipped cream and sprinkled with powdered sugar, and another that was a sweet bread with a chocolate swirl and mini chocolate chips on the inside. Both were outstanding, and the pastries were of extremely high quality. For that reason, Lawson wins at baked goods.

In conclusion, Japan exceeded our expectations. As far as food went, it was surprisingly delicious and we ate convenience store food way more often than expected. For incredibly low prices that almost felt criminal, we were able to buy an arsenal of hot food, snacks, and beverages. We were also thoroughly impressed by all of the other necessities that were offered there. It made us think about the difference in the quality of the food that is being offered in Japan and in America for around the same price. I feel as if we had the Japanese konbini method in the United States, we could solve a lot of our problems surrounding hunger.