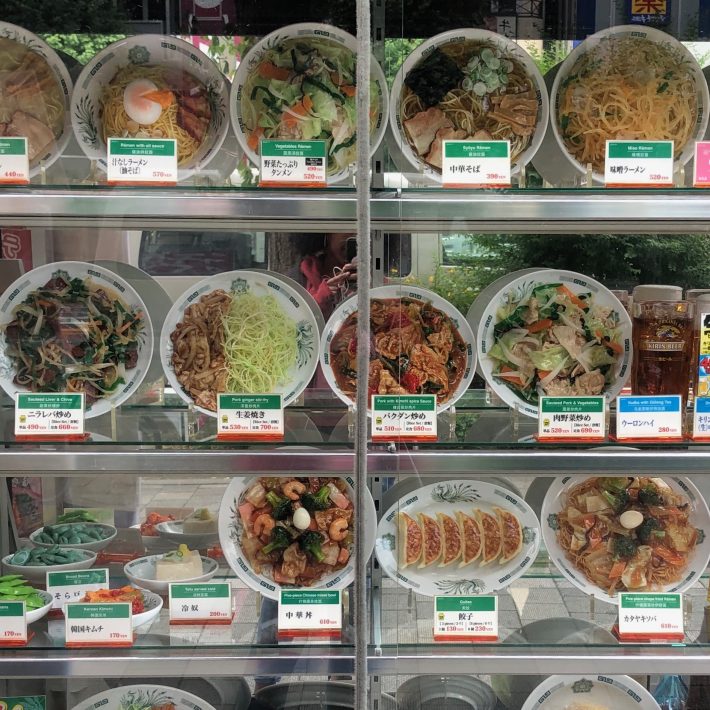 Everyone mistakes the beautiful fruit bowl in the new model home as real food. The gloss on the apple and the bumps on the orange are so realistic that you naturally want to take a bite. In Japan, they take this to a whole new level.

Most restaurants in Tokyo, Japan have a display wall of food in their window or on the street. At first, these displays confused me. My mind immediately thought: “Why would they let food sit out and spoil like this? How is it staying in its place like that? Phew, that ramen looks delicious!” However, as I looked closer I could see the gloss and shine on the corners of the “food.”

Turns out that these waxed foods are called Sampuru! (Sampuru comes from the word sample). The use of Sampuru dates as far back as the 1920s, when menus were not common at the time. These wax foods are made with polyvinyl chloride.   The creator is Takizo Iwasaki, who realized that candle wax could be molded into different shapes and foods. Iwasaki’s first attempt at food models was through making a sample of omurice, a popular dish in Japan. Iwasaki then opened up a workshop in Gujo Hachiman, which is now regarded as the central industry of waxed replica foods. According to the Smithsonian Magazine nearly 80 percent of Japan’s waxed food is made in Gujo Hachiman!

The wax is dipped in cold water and then molded through various techniques to create the desired food.

Sampuru are nowhere near cheap; restaurants pay more than $36 for a cup of tea! I’m positive they make up for this through revenue in their restaurant.

There are even locations where you can go in as a tourist and make the wax foods yourself!  Even if you don’t have time to sit down and craft a beautiful three-course meal, there’s plenty of souvenirs around Japan of fake food as key chains or phone cases.

Looking at the wax foods throughout Tokyo were extremely helpful. My Japanese is a little rusty and having a visual representation of the foods in front of me saved a lot of time and trouble. Instead of trying to whip out Google Translate and get an inaccurate description of the food, I could just look at the wax figure and see what was already there.

If I ever go back to Japan, I think Gujo Hachiman will be my first stop!