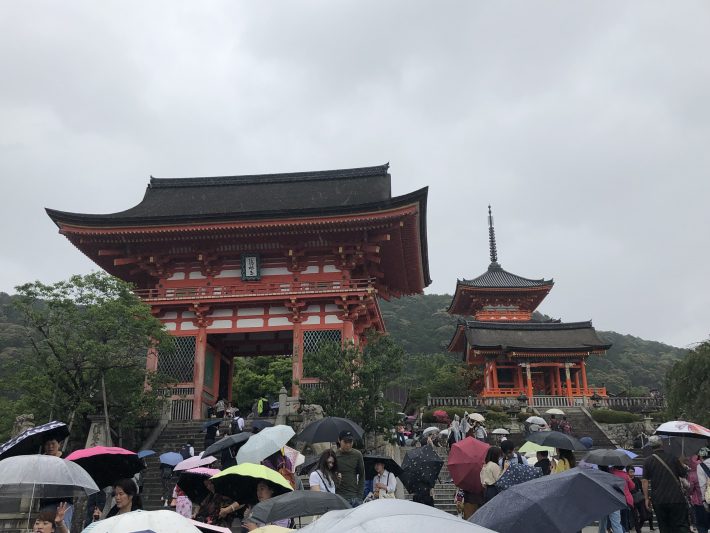 We made it to Kyoto! With a population of 1.7 million, it’s roughly one-tenth the size of Tokyo. There are fewer skyscrapers and more mountains, so it was quite the scene change. Our first full day in Kyoto on Sunday, was filled with trips to historic temples and shrines dotted throughout the luscious area. Our guide told us that there are over 2,000 temples and shrines throughout this ancient capital of Japan.

Getting everyone up this Sunday morning was a little rougher than most. After a full week in Japan, it seemed my classmates and I were feeling the effects of travel. Once we finally made it out the door, we got our day started with a short train ride to the outskirts of the city.

Our first stop was the renowned Fushimi Inari Shrine, famous for the path of one thousand torii gates. The long walk though the gates, although very crowded, was absolutely beautiful. It was truly amazing to see how much detail went into all of the hand carved lettering.

Some of us trailed off the beaten path a bit and soon find ourselves surrounded by a bamboo forest. After we made it through a portion of the gates and back to the entrance, we were lucky enough to witness a sword demonstration taking place on the main stage. Many of us quickly gathered around to witness the performance.

“It was really cool to see them practicing,” Grant Langford said. “You could tell by how methodical their movement was that they have trained a long time.”

Next on the itinerary was Kiyomizu-dera Temple. The entire place was surrounded by gorgeous green rolling hills. It was an absolute spectacle to witness in person. As we entered, we were asked to remove our shoes as a show of respect. Outside, we were graced with a gorgeous view of the surrounding mountains and pagodas. Further down along the trail was a waterfall divided into three streams that has a ritual attached to it.

It is said that if you drink the water from the first, you will increase your memory. The second helps you find love and the third provides increased longevity. Many of us drank up and eagerly hoped for the best.

Our final stop on the tour was the Yasaka Shrine, where we were told at least 300,000 people gather annually to celebrate the new year.

Although festivals commonly take place here, the Yasaka Shrine is also a very religious place. And so, we decided to make some small offerings and take part in individual prayer. On our walk back along the streets of Kyoto, we were awestruck by a few beautiful geishas walking by on their way to work.

This concluded our tour of Kyoto. After a full day of walking and sightseeing, our tired group headed to the hotel and called it a night. All in all, this was a very special day for me personally, as I was really looking forward to seeing the more culturally and historically significant sights of Japan. I was incredibly taken away by how pristine and immaculate all of the architecture was. This will be a day I won’t soon forget!