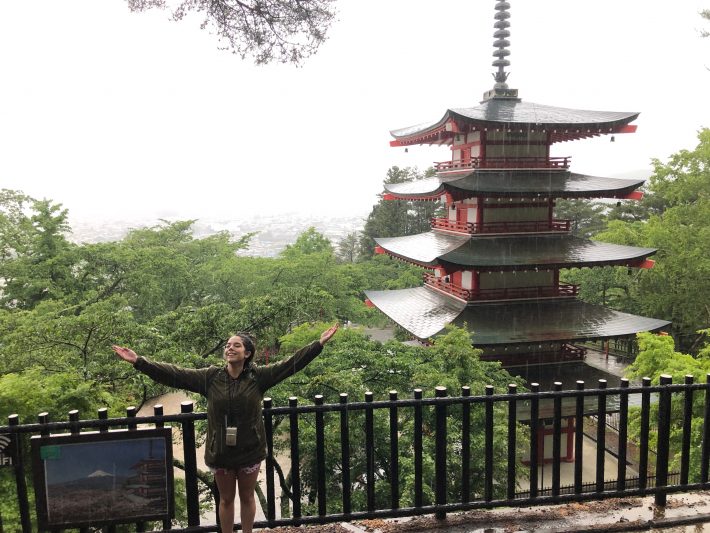 After months of planning and preparation for a trip I didn’t expect would ever happen, I was finally there. Like almost everyone who was with me along the way, I had only seen Japan in books, on the internet and in strange renditions of it in my dreams. The second I stepped off the plane, I had a lingering feeling that it would be over before I knew it. Therefore, I tried to live for every moment and try to really soak it all in while I could. The bustle of Tokyo, the poise of Kyoto and the history of areas like Kamakura and Mount Fuji had me absolutely mesmerized the entire time I was there. I have a few personal anecdotes that I’d like to share and some recommendations that I think anyone wanting to go to Japan must do.

Truthfully, Japan made me feel an entire spectrum of emotions, and I found out things about myself I didn’t even know. Traveling in a foreign country so far away from my own made me more nervous than I wanted to let on. Many shops catered to my current interests, and I walked through these safe havens with no hesitation. At times, I stepped out of that comfort zone, and did something I wouldn’t expect of myself. As someone who is not outdoorsy, trekking through nature filled me with wonder. I’m proud of myself for not skipping out on either of these opportunities because the memories I made are everlasting.

On our first free day, a small group of people and I made plans to go see Mount Fuji. For me, the decision was actually really spontaneous, and I initially only went because the people that were going seemed cool. The majority of us were able to buy bus tickets that were scheduled to leave at 12:20 p.m., and a couple of people had to get the later bus. Our group greatly underestimated how long it would take us to get to the bus station, and we showed up around 15 minutes after it left. Much to our relief, the woman working at the station simply rescheduled our tickets with no charge, putting all of us on the same bus. Some claimed it was the work of a god, and others said it was sheer luck. I said “Maybe” to both of those reasons and optimistically hopped on the bus.

As we rode through the Japanese countryside, my mind immediately went to the song “Hidden Place” by Björk. At the time, I perceived the song in a really literal sense and marveled at the small towns encircled by mountains covered in endless rows of lush towering greenery. I found solace coming to a place like this after being in one of the world’s busiest cities for the past couple of days. These towns made me extremely curious about the lifestyles of the people living in them. Kawaguchiko exuded a spirit that can’t really be described. Similar to a new-found lust for life, it made me think about how there really is so much out in the world and I wanted to see everything it had to offer. On the verge of tears, I was absolutely mystified for the entirety of our hike in the frigid rain up to the grand view of Mount Fuji. Shrines peppered the mountainside overlooking Fujiyoshida City. We would stop for a second, marvel at them, take some pictures and then keep on going. There came a certain point that came when we all realized that we were not going to see Mount Fuji because the cloud cover was too thick, but none of us really cared. We all just laughed it off and agreed that the journey was pretty damn awesome regardless.

The food court at the bottom floor of the complex across from the bus station was a delicious surprise. I ordered a hearty bowl of udon, a noodle dish I had never previously tasted, at the counter. Around the corner were shelves full of manga to read while waiting for the food to come out. I selected a volume from one of my favorite series, Jojo’s Bizarre Adventure: Stardust Crusaders. As I flipped through the pages, the udon arrived in all its cozy, soupy glory. With damp clothes and the A/C blasting through the food court, I longed for a way to shrink down and jump inside that bowl to submerge myself in the warmth. That bowl of udon will never be forgotten due to the fact it was one of the best things I’ve ever tasted. It’s upsetting to know that I’ll never get a bowl of udon that well-made in the states without it being overpriced or gentrified. The last memory I have of Kawaguchiko is watching the fog ominously roll through the Fuji-Q amusement park as we departed the bus station in our damp clothes.

While on the bus, I listened to “Hidden Place” again and related to the actual meaning of the song. Björk sings about how the connection among people can create a utopia. The place she refers to is not physical, and it lies within a frame of thought. I felt a similar bond with the people I accompanied. We saw so many amazing things and not one person complained on account of the unexpected weather conditions. We didn’t see Mount Fuji, but we didn’t need to. For all of these reasons, this day, in particular was a definite high point during my time in Japan, and a very significant day for me in general. Even though Mount Fuji can be seen only 30% of the time, it’s still worth the trip. Maybe just check the forecast beforehand.

As someone who enjoys photography, I am well aware that Japan is the capital of cameras. Most of the time, especially when traveling, I shoot film. Since I was 15, I’ve been fascinated with this method of photography for its nostalgia factor and element of surprise. For this trip, I had only brought four rolls of film because I figured that I would find whatever I needed. For this reason Bic Camera was a godsend for me. The shop I went to most frequently was the closest to our hotel in Tokyo and located in the heart of Akihabara.

The first time I needed to get film at that location, I went into this towering seven-story building that seemed almost too massive to have products that were exclusively photography related. Much to my surprise, the whole place resembled a supermarket, and I found out Bic Camera stores sell more than just cameras. Who knew? I recall the bottom floor being a market, full of snacks and a decently sized wine selection. The second floor had a hodgepodge of drugstore products, such as makeup, watches and suitcases.

As I ascended escalator after escalator, I started to wonder where all the camera-related goods were. How was I on the fourth floor of the largest camera store I’ve ever been to, yet hadn’t seen one camera? My confusion quickly turned to merriment as I made it to the fifth floor. Cameras everywhere. From 35mm point-and-shoots made for children, to cameras one could spend a fortune on, this place had it all. Regardless of whether you’re a hobbyist, or a professional, the fifth floor is what photog dreams are made of. My personal mission was to find a few rolls of 35mm Fujifilm ISO 400 color film. As of late, I hadn’t seen this kind of film sold in the drugstores I’ve perused back home. Walking through the seemingly endless field of cameras, I found the film section. Not only was I able to find exactly what I wanted, I also found rolls of film from Lomography, a creative and experimental camera/film brand that I’ve been in love with since my teenage years.

Weirdly, I felt at home in the store, even among people I didn’t fully know how to communicate with and J-Pop blasting through the televisions. Sometimes, I would go into the store alone just to check things out with no true intention of buying film, even though I ended up getting some in case I ever ran out (I never did). Whether or not you’re even into photography, Bic Camera has so much to offer. I actually never made it to the top floor because that’s how large the store is.

Comfort zones are an interesting figurative border that people impose in order to limit themselves. We have a love-hate relationship with them because of how much we enjoy the things bring us security, but loathe the anxieties we are riddled with anytime we step out of them. I enjoyed finding places like Bic Camera in Japan because I felt like I was able to relate to it on a level I didn’t have to overthink. I love old cameras, and here’s a store that sells everything I wanted and then some. With Mount Fuji, I stepped into an entirely new territory, left all my inhibitions behind and climbed up the side of a mountain in the pouring rain. It was powerful because it was something I didn’t think I would ever actually attempt, but I did. These two unrelated events really signified my whole experience here. Staying true to what I know, while also flipping that whole reality on its head and still being able to enjoy it is what traveling is really all about for me.