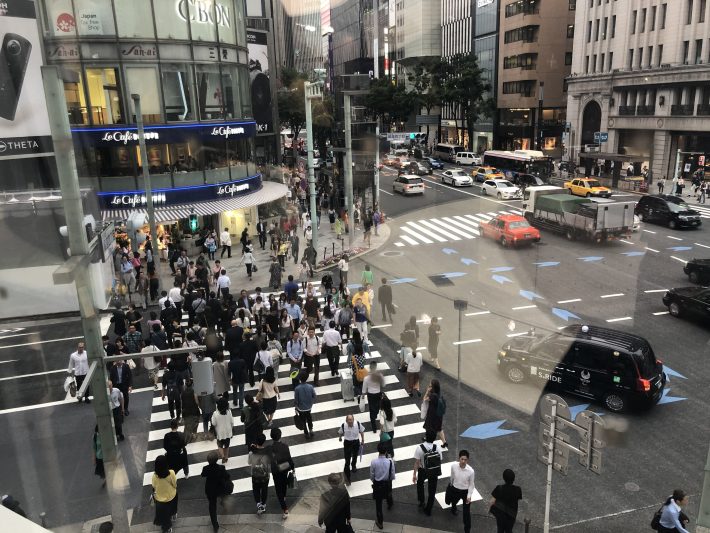 Public transportation is nearly the only way to navigate the big city of Tokyo, Japan. With the extensive amount of transit readily available, the city seemingly becomes smaller and more attainable. Throughout our time in Tokyo, we utilized every type of transit that was available to us in order to make the best use of our time. Most of the transit in Tokyo utilizes a Suica card in order to pay for fares. The system is as simple as it gets; all you must do is scan when you enter and exit the station.

The first and foremost transportation would be, you guessed it, walking. Walking was our primary means of transportation as we toured Tokyo. Our hotel, Hotel Mystays Ochanomizu, was conveniently located directly next to the Akihabara district, where we could utilize walking as our sole means of getting around. In between our differing points of transit, there were a multitude of 10-minute walks that we took to our next station. This became a norm for the group, although at night our legs were hurting, or “Dogs were barking,” as Program Assistant Jon Zmikly would say.

The subway was our most frequented means of transportation. Due to the subway crawling underneath much of the city in every direction, this transit is the lifeline of getting location to location in Tokyo. The subway system was quiet and tame. Nearly every passenger remained silent and kept to themselves. On top of the wonderfully calm atmosphere, the environment was seemingly spotless. This could be attributed to the fact that unlike the United States, the Japanese subway system completely closes at midnight.

The sky train was a transit option we took a handful of times, and it went to the places in Tokyo that the subway could not. For example, when we visited Musashino University, the transit required us to take the sky train, due to our crossing over water. The sky train is one of my personal favorite way to travel because I was able to sightsee and travel all at once!

At the beginning of our trip, we took our only chartered bus from Narita International Airport to our hotel in Tokyo. A few times on the trip, we found it more efficient to take a public bus rather than navigate the subway system. This typically meant little to no walking times in between the final bus stop and our hotel entryway. Just how we liked it!

In order to travel to Kyoto as fast as possible, the group utilized the shinkansen (bullet train). The bullet train was the most unique and exhilarating transit experience that I had during our stay in Tokyo, due to the sheer speed and uniqueness that coincided with the ride. The bullet train helped us to travel over 300 miles in just over 2 hours.

Overall, traveling in Tokyo was a breeze. I constantly drew comparisons to my trip to New York last spring break, and Japanese transit was much less stressful for me. I felt safe and comfortable on every ride.