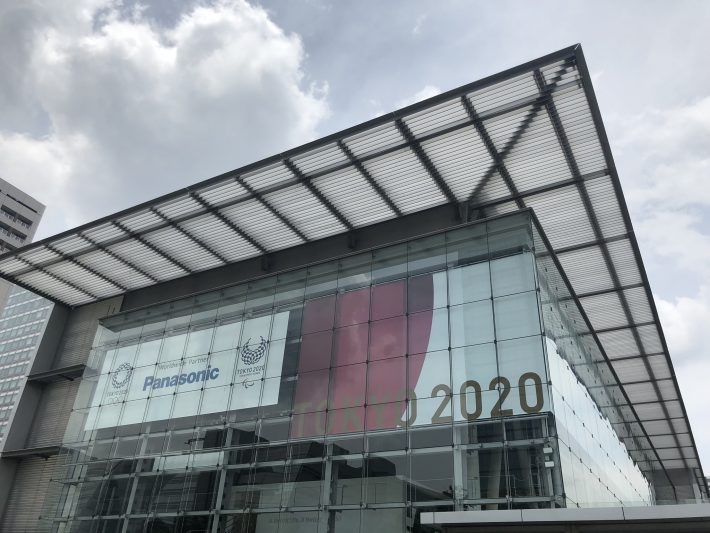 After spending the morning at Musashino University, most students decided they wanted to go their own ways for the afternoon to spend in Tokyo. Dylan Knight and I had already agreed that the best plan to go exploring is to not have a plan at all. Musashino U. was close to many things, so once we were dismissed, Dylan and I started walking in no particular direction. We visited a few stores and shops to take in the area, but once we saw the Panasonic Center, we knew it was a must-stop destination.

Neither of us knew exactly what we were getting into, which made it that much more exciting to see. As soon as we walked in, there was a Nintendo area equipped with gaming systems and a small exhibit of video game characters. After a quick game of Super Smash Bros with one of the workers, we stumbled into the rest of the building. Each corner had something new and unexpected for us to explore. All three floors were packed with intriguing things that can be played with while also teaching you about various subjects.

We found our way to an area where three very nice Japanese women gave us some sort of device and escorted us into a dark room. I don’t know if Dylan knew what was going on, but I, for sure, did not. They told us to use the device they gave us, ordered us to not take pictures, and let us out into the exhibits.

This area of the Panasonic Center reminded me a little of the children’s museum in Austin. There were many scientific games available that connected to the device around our necks and provided as much information as you could ask for. From things like graphing parabolas in an Etch-A-Sketch style and electromagnets manipulating liquid metal, these interactive displays were a treat, to say the least. One area was made up of small objects under a clear panel with reflections that projected it in a 3-D form. It really looked like floating objects!

The workers had been watching and laughing with Dylan and me as we explored each feature despite the language barrier. One of the attendants to the museum came out of the way to get our attention while we played a game to watch their video. We were specifically invited to the show. How could we say no? We came into the theater with 3D glasses on, and were the only ones there besides the woman conducting the show. She was projected on a large screen on live video and explained everything that was going on. She only spoke in Japanese, so we were just hung tight and tried to figure out what was going on. I was called up to be on the video, where they digitally shrunk me and threw me out into space!

The downstairs of the Panasonic Center was no less exciting. There were displays of tons of sports and hobbies, including rock climbing and skateboarding. There was also an interactive karate video that judged how well you could learn the moves. No doubt, the coolest display showed the actual Olympic torches used in the past six games. My jaw was on the floor when the attendant told me that they were not replicas, but the real torches used.

The Panasonic Center was supposed to be just a pit stop for our afternoon, but turned out to be incredibly interesting and kept pulling us in at every corner with something new. It turned out to be one of my favorite things we did during the trip for the exhibits alone. The workers were all super nice and polite and I could tell that they were having fun watching us explore all the things the museum had to offer.

This was the epitome of technology in Tokyo, grouped in with the excitement for the Tokyo 2020 Olympics. I don’t think there’s a better place to visit if you’re looking for tech and fun.