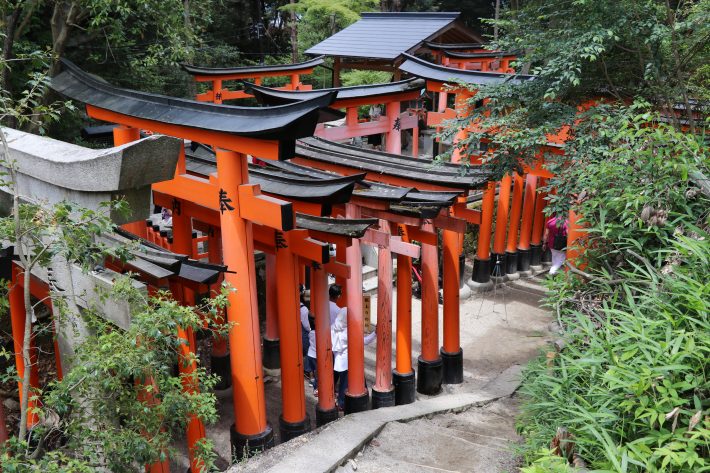 If you were wondering where my favorite place is in Japan, wonder no longer! Fushimi Inari Shrine is hands down my favorite place in Japan. It’s filled with beautiful red gates, statues of foxes and, even though it’s a huge tourist spot, peaceful paths.

Get to know this beautiful place

Fushimi Inari Shrine, also known as the Thousand Gate Shrine, is a Shinto shrine dedicated to the god of rice, Inari. His messengers are kitsune (foxes) which is why you will find statues of them scattered across the shrine. This shrine dates back to 711 A.D., making it over 1300 years old. Crazy, right? The legend says that a rice cake was shot into the air, which turned into a swan and flew away. The swan landed on a mountain peak, causing rice to grow there (an auspicious omen in Japan). This is said to have enshrined the deity Inari Ōkami (the god of rice) on the plateau, causing the start of Fushimi Inari.

Passing through a thousand gates

All the torii gates along the trail have been donated by businesses and individuals. You can find the names of the donors and dates of donation on the back of each gate. Small gates start at the price of 400,000 yen ($4,000 USD) and the larger gates can cost over one million yen ($10,000 USD) to buy. As expensive as they might be, the torii gates come together to form a beautiful hiking trail up the mountain. It takes about two hours to reach the summit of the mountain, which I sadly haven’t been able to do yet, but there are many exit paths along the way for those who don’t wish to go to the top. On the way, you can find a variety of foods and miniature shrines with their own small torii gates.

Seeing it for the second time

This was the second time I have had the privilege to visit Fushimi Inari, and it took my breath away just as it did in 2016 when I first visited it. After walking through the main gate and past the shrine’s main hall where you pay your respects, you come upon the entrance of the thousand torii gates. If you walk far enough past the entrance, the crowd begins to thin out and you can briefly find yourself alone with nothing but the gates. I wish the gates could speak because there’s no telling what they have seen over the 1,300 years some of them have been there. I was able to stray off of the main path during this visit, which lead me to a smaller shrine and a hiking trail through a bamboo forest. After hiking the trail for a few minutes, I just stopped and closed my eyes to take in all the sounds around me. It was amazing to hear nothing but the wind and leaves even though it was so close to where all the tourists were.

One day, I hope to go back and hike all the way to the top of Fushimi Inari, but for now I will enjoy the beautiful scenery I was able to capture with my camera.