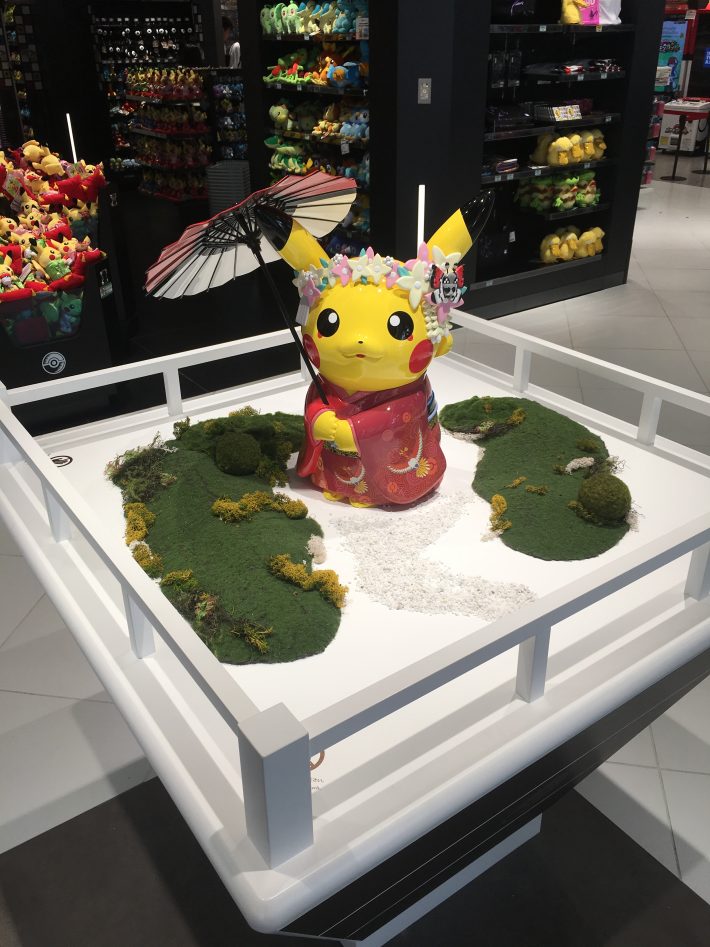 It was a wet and rainy day when we arrived in Kyoto. We had been maneuvering the subway and bullet train stations with our luggage in tow, causing me to be exhausted and a little overwhelmed. That was, until I saw the glowing signs that read Pokémon in a window as we walked down the street to our hotel. After unpacking and enjoying excellent Japanese style fast-food for dinner, I jumped at the opportunity to go to the Pokémon Center in Kyoto.

The instant you walk through the door, you’re greeted with a statue of Pikachu in a kimono and it couldn’t be cuter! He’s dressed like a maiko (an apprentice geisha) to show off Kyoto style and is a promotion for this larger Pokémon Center, which opened March 2019 after moving from its previous location. You can find limited-edition plushies just like the statue and a few other varieties as well.

I had previously watched a video by my favorite Youtuber, Sharmander (great name right?), who talked about how the 12 Pokémon Centers across Japan have a limited time campaign called MY251. If you can’t guess by the name, this campaign is all about the first 251 Pokémon; or in nerd terms, all the Kanto and Johto region Pokémon. It consists of stickers of the first 251, specially designed shopping bags and shipping boxes, plushies of the first 251, photo contests with those plushies and special Gold and Silver menu items at the Japan Pokémon Café.

That’s a lot of Pokémon! The best part is they’re only about $11 USD for each plushie, meaning you could buy all of them for nearly $3,000. Totally worth every penny, in my opinion.

There’s more to the Pokémon Center than just these plushies. Another fun thing they like to do is issue a new duo Pikachu plushie set every month. You can find these, and several other different types of plushies, featuring Pikachu in a variety of outfits, really fuzzy ones and even sleeping Pokémon plushies. The Pokémon Center also contains tons of Pokémon-themed stationary, figurines, cellphone accessories, clothing, videos games and even food.

If you find yourself in Japan, I recommend finding a Pokémon Center near you and checking it out. Each one contains different items and some even have battle arenas where you can find people playing the card game. Who knows? Maybe you’ll end up in a battle, too!