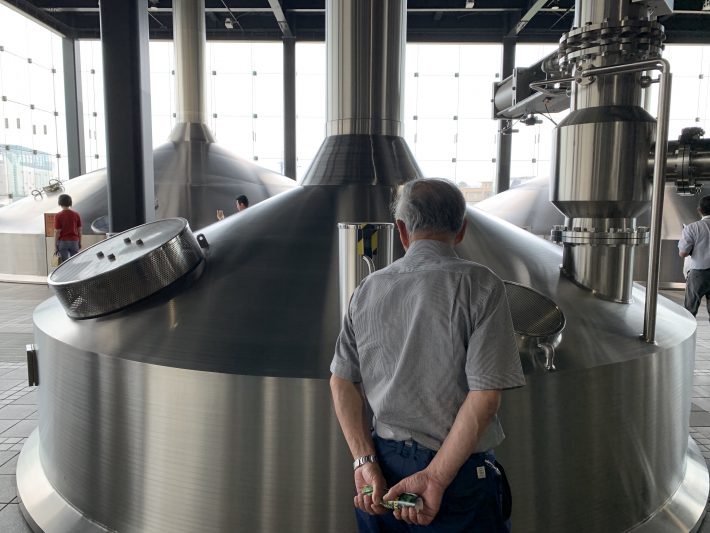 Just before our farewell dinner, the group had one last crack at their travel bucket list items with a free day in Kyoto!

Still sore from my adventures in golf, I decided to go beer tasting at the local Suntory brewery on the opposite side of town.

Now just so you know, I’m not just a casual fan of fermented yeast. In fact, I’m a participating Around-the-World club member at the Taproom in San Marcos, Texas.

Because of my membership in the club, I have been able to sample pint-size glasses from around the world without ever having to leave my favorite barstool in the 78666 zip code.

Accolades aside, I had some warning of what to expect from a Japanese brewery from Geoff Dosser of Tokyo’s Edelman office. He’s originally from Australia, and he told me his biggest gripe about beer in Japan was the amount of head (frothy foam) poured onto a beer.

“They say it locks in more flavor and prevents the beer from oxidizing too much between sips,” Dosser said. “But for me, it just gets in the way too much.”

Warning aside, I wanted to go to experience the vastness of Suntory. Imagine if Bud Light also distributed water, soft drinks and whiskey; that’s how big this place is and a very quick example of how much product they’re moving.

Their stuff is in vending machines and almost every local izakaya (a type of Japanese pub) across the country.

Industrial buildings dominated in this subsection of the city, and I could see the brewery tanks peek out against low clouds from the train station a few miles away.

I popped into the main lobby of the brewery and was immediately redirected, given a waiver to sign and handed an English brochure.

“Is this tour in English or Japanese?” I asked.

“Japanese,” the receptionist responded in English.

But she reached in a drawer and dug out a recorded audio version of the tour that I would allow me to follow along.

Soon, I was ushered into a room as the only American tourist.

The tour group I was with was from Osaka and on a brewery and whiskey distillery tour for the day.

The tour guide started to talk about Suntory, so I hit play on my audio tape to start my adventure.

We went through the entirety of Suntory’s brewery process. I even got to eat some of the dried wheat and other ingredients used to make the beer; it tasted as you would expect.

After the tour, I was led into a room with the group and told to take a glass of Suntory’s Premium Malts, their signature draught on tap.

Head height aside, I thought it was a little dry and had the distinct taste of a wheat beer. The next one, “Master’s Dream,” was just a hint darker, but had a nice rich note, almost like a bock beer but not quite.

As the only American tourist, I got handed a questionnaire about my experience and began filling it out while sipping on the third beer, Suntory Kaoru – my favorite of the three. I thought it tasted similarily to a Belgian white, my favorite, when I noticed some distinct giggling and a camera flash.

A few of the tour group members had been watching me take this beer tasting too seriously and were taking pictures of me doing the survey!

I posed for a couple of pictures with them before connecting on Instagram.

With the help of Google translate, they told me what they were up to for the rest of the day and we soon said our goodbyes.

Sorry Japan, but Belgium still has my heart when it comes to beer.