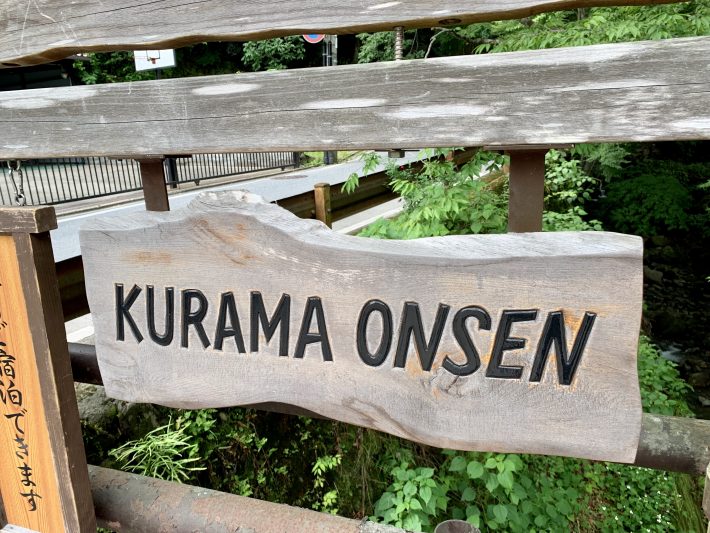 Stripping down to your birthday suit in front of a bunch of strangers can be intimidating at first. Though the U.S. isn’t the most modest of countries, we’re still relatively conservative when it comes to nudity. Nude beaches are few and far between unlike some places in Europe or South America, and you don’t see many men rocking speedos in public pools or women with their tops off (unless you frequent Barton Springs pool in Austin, that is). At the very least, we’re accustomed to being in public in some form of a bathing suit that, at minimum, covers our essential bits.

So, what are five Americans to do in a Japanese onsen (hot spring) surrounded by naked people with nothing to protect them from the elements and wandering eyeballs but a tiny towel and whatever their hands can cover? In our experience, the best course of action is simply to step into the magical healing water and embrace the experience without hesitation.

Onsens are Japanese spa facilities built around naturally occurring hot springs, and are easy to find in Japan as it is a volcanically active country. Though soaking in a communal hot spring with other naked people may sound bizarre to some, public bathing is not taboo in Japan, and is actually very normal. In fact, there are over 3,000 onsens in Japan, and their communal use dates as far back as 552 A.D., when they were predominantly used for religious and cultural purposes. Over time, onsens have evolved into a widely normalized activity for socialization, health, and simple relaxation.

Due to the naturally occurring vitamins and minerals found within the water, there are many proven health benefits to soaking in an onsen, including relief from symptoms of arthritis and neuralgia. The hot water can also loosen tight muscles and relieve stress throughout the body.

There are various types of onsens in Japan, but because we were hoping to enjoy a view while soaking in the hot water, we opted for an outdoor facility in Kurama, about an hour’s bus ride out of Kyoto. By the time we arrived to the closest stop to the onsen according to Google Maps, we were deep into a rural neighborhood within the mountains and there were very few people around.

We quickly spotted a wooden sign pointing us in the direction of the onsen, and after crossing a bridge found a small kiosk in front of a stone staircase leading up to the entrance. There we purchased our tickets for 1,000 yen (about $10), and two towels per person (one for washing, one for drying). We then were led up the stairs and into the locker rooms, where we said goodbye to Michael, who had to go to the separated men’s area.

Next we removed our shoes and found our lockers (easy, peasy) and then entered into the changing area (Oh God, what did we get ourselves into?) where we were immediately met with about 10 completely naked women, casually going about their usual onsen business. We exchanged a few glances with each other and became very confused with how to open our lockers, where to get undressed, and what we could take into the onsen to cover up with (apparently, not a thing). So, with all excuses to keep our clothes on any longer used up, we stripped down to absolutely nothing and entered into the shower area. Sat on a stool out in the open in front of a mirror and using provided soap and a shower head mounted to the wall, we scrubbed our entire bodies squeaky clean. By this point, we all were pretty comfortable with the situation, and began to fully embrace this interesting and totally unique cultural experience.

Finally, we stepped into the onsen water, where all of our worries and reservations quite literally melted away. The hot spring was incredibly relaxing, and nothing like the chlorinated hot tub water we were probably expecting. The view of misty mountains from the onsen was beautiful, and we all sat next to each other speculating about how awesome onsens probably are in the rain or in the cold. We sprawled out and floated for awhile with our eyes closed before finally getting too hot and hopping out to rinse with cold water, dry off, and change back into our clothes. We met Michael outside, and the five of us extremely relaxed and zenned-out Americans rode the bus back home, having fully experienced and appreciated the centuries-old Japanese tradition of the onsen.

*Unfortunately, we were not able to take pictures inside of the onsen itself (you can probably guess why), but you can see what it looked like inside with a quick Google search of “Kurama Onsen”*

My friend visited Japan recently and highly suggested I visit an onsen during my trip, claiming it was an awesome experience and basically unique to Japan. Even though getting naked in public wasn’t something I’d done before (the opportunity hadn’t exactly presented itself), I like to consider myself an adventurous traveler, so I fully planned to stop by an onsen at some point during my time in Japan. I was really glad that people from our group decided to join during one of our free days in Kyoto, and found the whole idea very intriguing and exciting. I had such a relaxing experience there and was very surprised by how quickly I became comfortable floating around the same water as a bunch of naked strangers. I would definitely recommend going to an onsen to anyone visiting Japan and hope to have another experience in one soon. Until then, can I borrow someone’s hot tub…? Asking for a friend.

At first I was a little hesitant with getting dressed in front of everyone. I’m a little insecure about my body and also, being one of the two black people (India Sherman joined) there, I thought people would stare. But once everyone started undressing I felt more comfortable. Nobody stared and everyone was just there to take a bath and soak in the warm water. If you have any concerns about your body or with nudity you’ll have to leave it at the door, because I promise you no one really cares. They are there to take a bath and relax. My favorite part was stepping into the onsen. It was a little warm outside but that made it all the more refreshing. At one point I was curious if the water would feel even better if I had taken a cold shower instead. I went to the showers to do a cold rinse off and could only handle the cold water for two seconds before jumping back into the hot springs. In the beginning, the temperature was too drastic and I thought I couldn’t feel my feet, but once it settled the hot springs was even better than before! Overall, I had a great time and would definitely go there again!