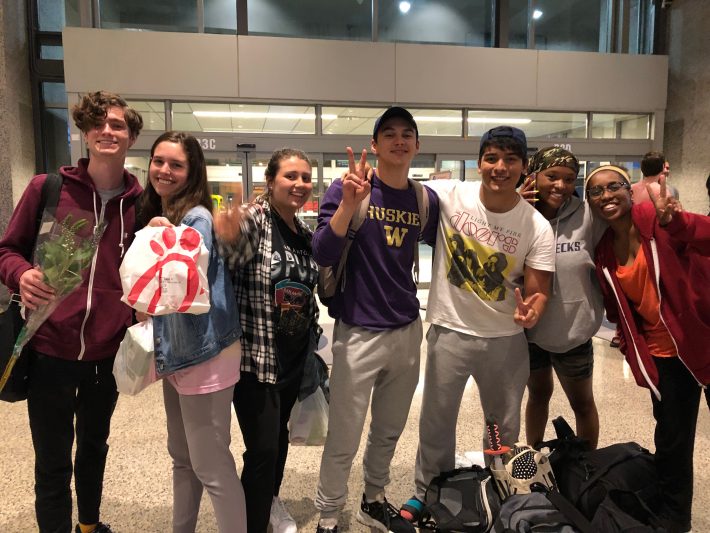 After an adventurous 11 days in Japan, our study abroad trip has come to a close. We visited Toyko, Kamakura, Enoshima, Kyoto and (for some of us) Osaka before departing from Kansai International Airport in Osaka. A few of us are extending our stays in Japan, and others are even visiting different countries!

We departed from Hotel Mystays Kyoto Shijo at about 10:30 a.m. Wednesday and hauled our luggage to the nearest shuttle bus stop, which was a treacherous 10-minute walk in the Kyoto heat. The original plan was to get to the airport through subways and local bus routes. After deciding that towing our luggage across Kyoto to Osaka would be too troublesome, we settled on taking a shuttle bus.

Our group arrived at the airport at 1:10 p.m. There were a series of questions each person had to go through, such as: Why did we visit Japan? How long were we staying for? Do we plan on coming back? Can we see your samurai sword? Do you sell crack? The interviews were the extent of their background check. At security we had to unpack our carry on bags and remove electronics and jackets, but not our shoes, interestingly. 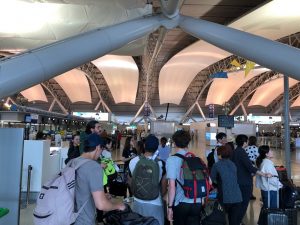 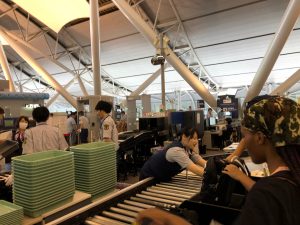 There was a tiny conundrum with handling India Sherman’s souvenir lighters. Only one lighter was allowed per person, and unfortunately she had four. Thankfully the security guard helped us sort it out and even translated the phrase on the lighter for us! In Osaka, the phrase — nandeyanen — means “What are you talking about?” 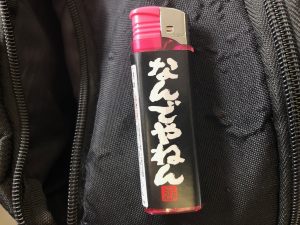 After a quick visit and goodbye from Biying Ding, our favorite tour guide and program manager assistant from Asia Institute, we boarded our nine-hour flight to Seattle at 3:05 p.m. We had a long day ahead of us.

On the flight to Seattle, most people watched movies or slept. When we landed at 9:22 a.m. there was a long line to get through Passport Check. Stepping into an American airport was definitely a culture shock. No longer were there quiet hallways and gentle employees, but instead noisy chatter and snarky security guards.

There was a six-hour layover at Seattle-Tacoma International Airport. Everyone who flew back to Austin spent their time working on assignments or catching up on sleep. This time around, we avoided Greedy Cow Burgers (see Dylan Knight’s post about traveling to Japan via Sea-Tac by clicking here)! A few of us explored the terminal to find different foods to eat. 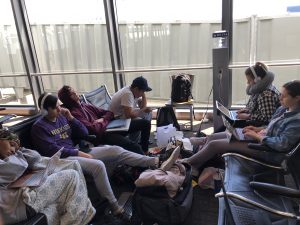 Once we boarded our flight to Austin, we all tried our hardest to stay awake, but unfortunately we were all asleep within the first 10 minutes of the flight. After about 19 hours, we landed in Austin at 11 p.m. Wednesday.

Michael Southall traveled with us all the way to Seattle, but hopped on a different flight to Minneapolis, Minnesota. From Minneapolis, he caught a connecting flight to Austin.

Meredith Martinez took the bus with us all the way to the Kansai International Airport. However, she took a flight to Phuket, Thailand. She planned to travel solo to the Elephant Sanctuary and many other places, spending a week in Thailand before returning to Texas.

Samantha Dunn departed to Okinawa, Japan, and plans to stay for three days, hoping to visit the Okinawa Churaumi Aquarium. She is also traveling solo and staying at an AirBnB.

Joined by her mother and sister, Melody Martinez took the bullet train to Tokyo. She said she was looking forward to showing her family around Tokyo for the next five days, including visits to the Pokemon Cafe and Tokyo Disneyland.

DeAnna Ryan will stay in Japan until July 27. For the next 13 days, DeAnna will be on her own for an AirBnB in Tokyo. In July, she is getting a certification to teach English in Japan. She hopes the certification will enhance her application for the JET (Japan Exchange and Teaching) Programme.

Program Assistant Jon Zmikly helped everyone arrive at the airport safely. He plans to stay for an extra two days to hang out with his friends in Kobe, Japan. They plan on going to the beach before he departs Friday.