On Sunday June 9, 2019, we made it to Tokyo in one piece. Everyone that was enrolled in the program has made it safely! Gilbert Martinez, our Academic Program Director, had a running timer from our departure from Austin to our arrival in Tokyo, which totaled to approximately 16 hours and 45 minutes. This time includes our two hours 30 minutes layover in Seattle.

The day began with the group meeting at Austin-Bergstrom International Airport at 4 a.m. Central Standard Time. The group began by checking our bags and getting through TSA. Everyone glided through this process, with only one of us having to be screened due to a forgotten iPad in a bag. After our check-in, it was a waiting game until we boarded at 5:55 a.m. The flight departed at 6:30 a.m., and lasted roughly four hours.

On the flight, the vast majority of the group was asleep. We were all completely drained. Most of us had not slept the night before whatsoever. The entire flight was quite the breeze, especially compared to the longer stretch that we had ahead.

Prior to our flight, we had two and a half hours to pass the time. Mostly, everyone in the group exchanged currency from U.S. dollars to Japanese yen in this downtime. Luckily because most of us exchanged at once, there was no service fee that was added.

Following the currency exchange, we decided to eat our last “American” meal in the airport. Some decided to eat at Greedy Cow Burgers, and we weren’t very impressed. Grant Langford decided to get coffee at Peet’s Café, which he enjoyed. The food and drink were pricy, which one might expect from a meal in any airport.

The flight from Seattle to Narita International Airport began with a string of announcements leading us to our departure. Throughout our nine and a half hour flight, we occupied our time in a variety of differing ways, including watching movies and televisions shows, playing video games, reading books, writing journal entries and more. “I was mostly eating. I really didn’t do much else,” Jakob Rodriguez said.

The flight hosted a string of offerings for amenities, breaking the monotony of our travel by keeping us busy eating and talking from time to time. The first meal, our “dinner,” was a full meal with a protein, rice, salad, bread and drink. Next, we were brought a snack that included crackers and cookies. After a long stretch, where most passengers slept, the flight attendants brought out ice cream and refreshments. Finally, we had what was our “breakfast,” including a burrito, a drink, a Kit-Kat, and a cup of pineapples.

In order to mimic the nightly environment, the flight attendants had all passengers close their window shades. The entire cabin grew dark, and the lights were dimmed. 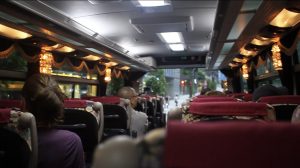 Following our landing at the Narita International Airport, we took a bus to our hotel in Tokyo. The first thing that many of us were reminded of would be the driver’s side opposing the usual placement in the United States. We noticed a couple of Japanese drivers that shared our mutual fascination with them, laughing along and glancing over at us. Another interesting nuance was the fact that multiple drivers were watching television on their center console. One Japanese man was watching baseball, while another watched what seemed to be a sitcom.

Although the majority of the group traveled together with arranged flights, five of our students had differing itineraries to arrive at our destination. Some of the students plan to extend their stay past the official end date of our study abroad program, therefore saw fit to arrange their travel independently. Along with each individual student’s travel plans came a unique set of difficulties and nuances.

Samantha Dunn departed from Houston at 6:30 a.m., and had a layover in Calgary, Canada shortly following. Samantha landed at Narita International Airport at 2:35 p.m. Japan Standard Time after flying in an empty row, which she enjoyed greatly.

Meredith Martinez departed on a direct flight from the Dallas International Airport at 11 a.m. on June 6, 2019, and arrived 1:45 p.m. Japan Standard Time on June 7, 2019. Martinez had a smooth experience traveling to Tokyo, yet had a slight difficulty learning how to use the differing appliances in the hotel that she was staying in her first night. On her second night, Meredith stayed at the Nine Hours Capsule Hotel in Narita International Airport with DeAnna Ryan. The space was minimalist and separated by gender. Meredith said, “You cannot bring in any food or drink into the capsule. You only go there to sleep. There are signs throughout the hotel reminding you to please keep quiet and cellphone use is frowned upon.”

DeAnna Ryan departed on June 7, 2019, and landed in Tokyo on June 8, 2019. DeAnna’s favorite part about traveling alone was the opportunity she had to stay at the Nine Hours Capsule Hotel in Narita International Airport. Along with Meredith Martinez, this was DeAnna’s first stay in the hotel.