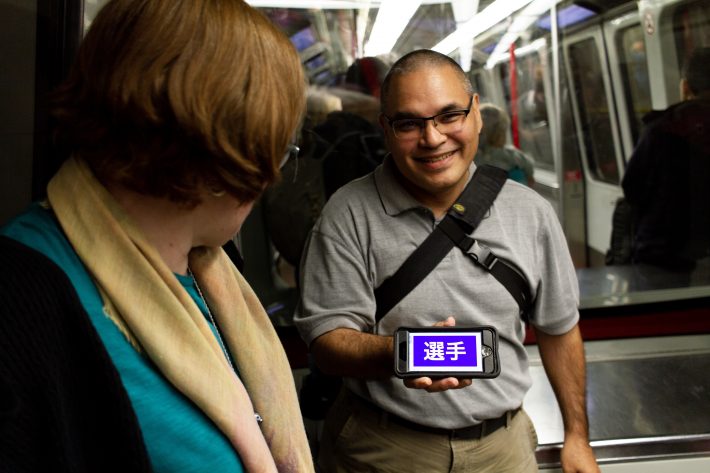 Prior to attending the study abroad program in Japan, I received a multitude of questions from friends and family who were generally concerned about my attendance. Traveling across the world comes with a different culture, environment and language. They’d often ask, “Will there be a language requirement in order to attend this trip?” The short answer to this question was no. However, using other forms of navigating and communicating were a crucial skill set that required a slight learning curve. In this post, I hope to alleviate some of that learning curve for others by explaining how my classmates and I conquered this fear of miscommunication and misunderstanding.

When in a bind, the most useful tool for instant translation would be a translation application on a mobile device. The most used (and useful, in my opinion) application is Google Translate (demonstrated by Dr. Martinez in the featured image above). Although the outcome often turns out comically incorrect, the application is a lifesaver in certain situations. For instance, whenever the group went out for dinner, not all restaurants accommodate English speakers. Often, only Japanese menus were provided. In these instances, you can sometimes choose by imagery, or yet another method was the photo translation option in Google Translate. Kanji, the symbols that make up the Japanese language, are complex characters that are not easily distinguished if you are not fluent, and typing them into the application was inadequate.

A vast majority of Japanese advertisements, menus and product packaging have vivid imagery that helps interpretation of the message being conveyed. While getting a bite to eat, the majority of restaurants will have ceramic depictions of portion sizes and meal types outside of the entryway. This not only draws people in, yet also helps to explain what it is the restaurant is actually serving. In addition to physical depictions, restaurants use vivid images to showcase certain menu items (which is personally how I chose what I would eat, outside of outright copying my peer’s decision).

Other than the use of imagery in restaurants and stores, there are a multitude of applications of imagery to help convey a message quickly and concisely. For example, I found a poster showcasing a man falling into the path of a moving subway train. This conveys a potentially dangerous scenario that draws attention to an issue and showcases an emergency stop button as a solution that everyone can understand. Push button, stop tragedy.

Although there is no language requirement to travel abroad, learning key phrases to subsist on throughout a trip is helpful. For example, when you run into a local resident on the subway, receive a favor from someone or require a restroom, it is better to quickly reference this knowledge than utilize another resource such as a translation application. That being said, saying these phrases to a local can be an unnerving experience. I finally overcame my fear of saying arigatō gozaimasu (thank you in Japanese), after a number of encounters. Politeness took precedence over pride in this case, for I would rather say “thank you” wrong than stare at someone that has done something for me.

Although it may seem obvious, another crucial element is tone and body language. One must understand tone in order to navigate conversation, for this is how people share emotion verbally. For instance, if someone is trying to tell a stranger that the train door is closing on them, they might speak loudly and quickly. Using gestures, one can request a changing room, explain how many guests will attend a dinner and ask for directions. Even without an understanding of language, these nuances of conversation are what make verbal exchanges between those who speak differing languages legible.

Matching kanji by process of elimination

Lastly, we matched kanji using the process of elimination. This is the method that Katharine Robertson and I used on our quest to find Muji, a stationary and miscellaneous goods store that we sought out. When we decided to search for the store, we came to the realization that it lacked a storefront with Roman letters. We utilized Google Maps to lead us to an underground shopping mall, where we found a map with all of the store names written in kanji. The first step we took was to find all stores on the list that had four kanji. Next, we matched the first kanji and narrowed the list down to a few options. From this point, we had a slim list that we could easily match with the four characters we had found for Muji online.

Following our time in Japan, I feel as though I have learned a vast amount about language. The fact that we were foreigners proved apparent, for we were sometimes at a loss in social settings that required discourse. However, utilizing these learned skills, we navigated the country with relative ease. Although the tips mentioned are not exhaustive, they are a great step in the right direction for those that plan to venture into a country that they do not speak the native tongue.