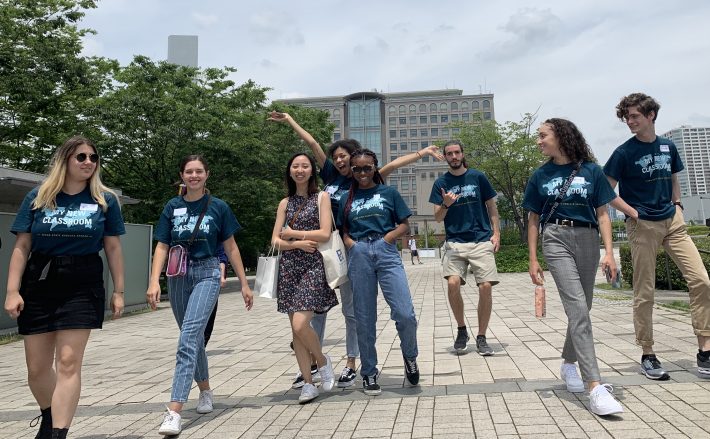 KOTO CITY, Japan – Walking on to any university campus for the first time can be a mix of emotions. Our group’s visit to Musashino University’s Ariake Blue Campus on Friday could best be summarized in one word: wonder.

Musashino Girls’ School in Tsukiji, was founded by internationally renowned Buddhist scholar Dr. Junjiro Takakusu on the principles of “Buddhist-based human education” in 1924.

According to MU’s history page on the university’s website Takakusu emphasized women’s education and involvement in society.

The meeting of the two schools was the last scheduled event on our itinerary for Tokyo before departing for Kyoto on Saturday.

Armed with gifts for MU students we would be meeting during our study abroad exchange, we all marveled at the location of the campus itself.

Tokyo was selected as the site for the 2020 Summer Olympics and Paralympic games, but Ariake, a district within Koto City which houses the university, is also a stage for several events including volleyball, cycling and skateboarding. The Olympic torch itself will also be stored near the campus.

After arriving at the conference room, we soon found ourselves nervous and anxious at the thought of interacting with the students we would be meeting for the first time.

The students themselves, many of whom were studying or had studied either mass communication or international relations, began to file in and sit at tables pointed out to them by faculty members with two-to-three members of the School of Journalism and Mass Communication’s study abroad group per table.

I sat next to Asteria Zhang, a global business junior from Shanghai, China, and expected the worst. I feared that I would not be able to compare my humble upbringing from McAllen, Texas, and education from Texas State University to even a fraction of her life.

But, then she turned to me and asked if I knew what was for lunch.

“I really hope it’s not from the cafeteria,” Zhang said. “That stuff is always really bad.”

I laughed, almost impulsively, but hopefully enough to break the ice. We made small talk until our table was full of new friends.

As it turned out, the lunch buffet provided by the international office was made up of sushi, fries, salad and an assortment of fish and chicken. A huge hit with both groups, it was gone in minutes.

Kicking things off, faculty members from both universities made opening remarks about their institutions. Meanwhile, the students at the tables passed around phones and added each other on Instagram.

Soon, the room’s lights were dimmed and ambient-sounding guitar music played as an informative video about Musashino University started. In both surprise and out of courtesy, the chatter at the tables died down to only whispers. Marcus Christensen, also a global business junior, looked with surprise at his classmates and me.

As quickly as it started, the video ended with the same guitar notes. The room’s curtains were opened and it was time to begin what we had come here to do in the first place; interact with the students themselves.

Faculty members of both universities walked around and handed us a pre-arranged set of questions which both groups had become familiar with days in advance. We were asked to discuss questions ranging from cultural experiences to media literacy.

Attempting to get out of every college-aged person’s comfort zone – name games and introductions – we opted to first just talk about ourselves and life.

We joked about the similarities of people assuming Merawee (May) Taesuwan, a global business senior, rode elephants back home in Malaysia and how people thought we all rode horses to school in Texas.

However, one fact about college is present always; regardless of where you go to college, it will end.

We talked about senior theses, a requirement for graduation in their program, and what we thought would happen when we did graduate.

Then, David Tedone, a professor with the Department of Global Business at MU, tapped the microphone; it was time to share reflections of the visit and my group hadn’t discussed anything relevant to the provided questions.

Instead, we debated the National Basketball Association Finals in America and indulged in a few too many stories about crazy Texas politics and living abroad.

When the microphone came to Marcus and me, we looked at each other for a few moments, unsure of how exactly to continue. We could not simply follow a group who went line by line answering question by question. So, we decided to freestyle.

We talked about the “global experience.” I talked about how May missed cereal from the United States and about how 7-Eleven convenient stores in Japan lacked slushies. Marcus talked about the generational differences  between our professors’ ideals and our own. We had a rap prepared, but we opted for a performance riddled with one-liners and inside jokes that only people from our group would understand.

While our presentation was not 100 percent on topic it was every bit uniquely our own.