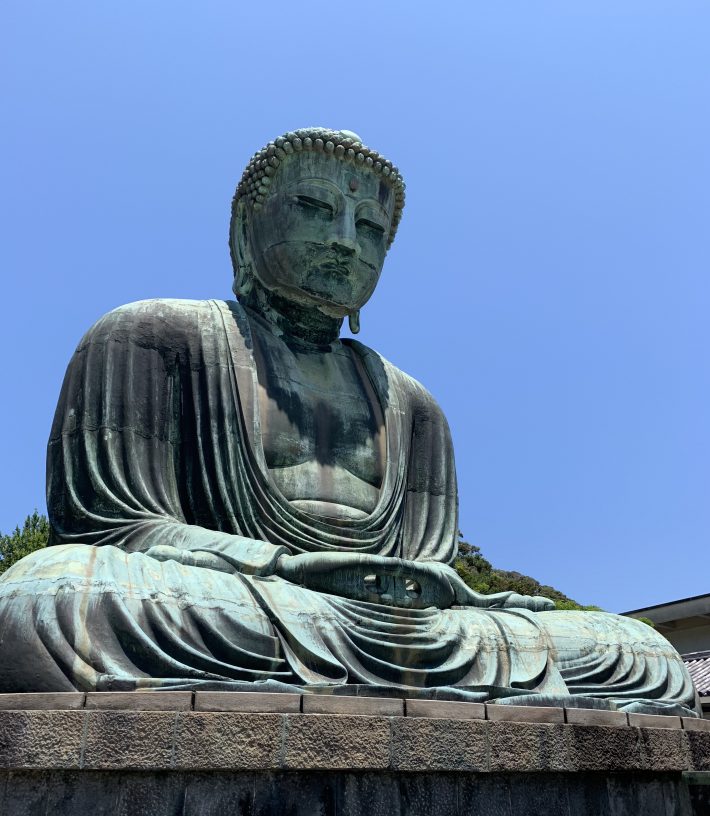 As we have become comfortable and at home in Tokyo, we needed to get away from the metropolis we’re currently living in. So on Thursday, we set off on a day-long adventure to the seaside town of Kamakura where the sights and sounds delighted us beyond belief, even if we did have “Karma Chameleon” by Culture Club stuck in our heads all day.

Throughout this whole experience, we have started to understand the public transportion in Tokyo, which is known to be just a little tedious and confusing (read: very tedious and confusing); however, today we encountered the daunting Tokyo Station during morning rush hour. We gussied ourselves up and headed out bright and early. We made our way through our normal haunt of Ochanomizu Station and onward to one of the busiest train stations in the nation. For the record, Tokyo Station is the third busiest station in all of Japan with its daily average number of boarding passengers at 415,908, based on 2013 figures. On our first day of riding the metro, we were told that in order to get through the sheer number of people getting on and off trains we must “act like water;” this helped us navigate through the sea of people in Tokyo Station.

As much as I am hyping this up to be some disaster, it was surprisingly painless and after a quick 10-minute ride, we had made it to our next adventure; an hour-long train ride to beautiful Kamakura. This ride may sound boring and well, it clearly was for some of us (check out Grant Langford in the photo to the left). But we made lighthearted conversation and continued to solidify our new friendships. The ride went by in a blink of an eye, and we soon went from one of the largest metropolitan areas in the world to the suburbs of Tokyo and the towns and neighborhoods that border the capital city. After being surrounded by so many buildings for days on end, traveling to the countryside and seeing family homes was a refreshing change of pace. It also served as a reminder that there is more to Japan than the hustle and bustle of city life. It is also forests of Japanese maples, hinoki cypresses and islands of small-but-compact towns and villages.

Our long journey led us to a town on the eastern shore of Japan called Kamakura, formerly the capital of Japan that held the title of most populous area from 1200 to 1300 AD (even though I’m sure the competition was not a tough one). The seaside town held many secrets and treasures just waiting for us to come find them.

Our first stop was Hasedera, a Buddhist temple featuring different sights ranging from hydrangeas to giant wooden sculptures of different Buddhist deities. Hasedera is built on the side of the hill and let me tell you something, it really felt like we were back in San Marcos going up all those stairs. We came at just the right time and got to see the hydrangeas blooming on the side of the hill. The top of the hydrangea path led us to the most beautiful view of the sea and the town that surrounds it.

In the middle of the temple, there stood a beautiful building that housed the highlights of its deities. Inside the main building was the giant statue of Kannon, the goddess of mercy, staring down at us from her height of a little over 32-feet tall. The wooden sculpture was the most magnificent thing I saw that day. Sadly, taking pictures inside was prohibited. You might be able to sneak a peek online, but not on this blog.

The rest of the temple had smaller shrines here and there; one was for mothers coping with miscarriages looking for closure. The most unexpected shrine came in the form of a cave for Benzaiten, the Buddhist deity of women, music and beauty. The cave had twists, turns and extremely low ceilings (I’m 5’3” and I had to crouch, so best of luck to you tall people).

As our time ran out, we packed up from one temple to another. But this wasn’t just any other temple; this was the Kamakura Daibutsu, which means giant Buddha. This bronze Buddha is the largest in the country at 43.8 feet (since we’re in Japan, that measures 13.35 meters). Daibutsu is the main attraction in the shrine and has had a bit of a rough go of it so far. The Kamakura Daibutsu dates back to the 1250s (I wasn’t even born then, and neither were you) when the town of Kamakura was booming and thriving as the capital. This Buddha was once gilded (meaning it was covered with a thin layer of gold). Some people in the group paid 20 yen and were able to go inside of Daibutsu. “Going in there was insane,” Melody Martinez said. “I had no idea we could even do that until I saw the side entrance.”

Daibutsu was originally not meant to be an outdoor temple. This Buddha had a temple built around him, but the temple was inevitably destroyed not once, not twice, but three times by storms and tsunamis. This resulted in the decision to not rebuild the structure. Daibutsu has been open to the elements ever since.

Here’s a question I bet you have never be asked: Have you ever wanted to be in Japan and Hawaii at the same time? Well, if you answered yes, then don’t worry; there’s a way you can be in both places at once! Enoshima is known as the Hawaii of Japan. Getting to Enoshima (shima means island in Japanese so even though you would like to call it Enoshima Island, I promise you, it’s just Enoshima), we boarded, yet again, another train; however, when we got there, we were not greeted by temples and wooded areas but instead, a beach and clear blue skies (except to the west; pay attention because this will be important shortly). To get to the heart of Enoshima, we walked down what may be the longest pedestrian bridge ever. Program Assistant Jon Zmikly helped us pass the time by singing “Kama-Kama-Kama-Kama-Kamakura” to the tune of “Karma Chameleon.” But inexplicably, we somehow arrived to the island paradise of Enoshima with shops lining the small streets and alleyways and the smell of sugary sweet food took us by surprise.

We began our trek up the mountain that made the hills of San Marcos look like flat ground. Inside the temple, there were many different deities to pray to and worship, but what stole the show for me was the views. Once we made it to the top, we saw some of the most breathtaking views that are difficult to describe, especially because we couldn’t see Mount Fuji as we hoped because clouds to the west obscured the view. Regardless, this day trip to Kamakura reminded me how lucky we are to get to explore Japan and the beauty that inhabits it.