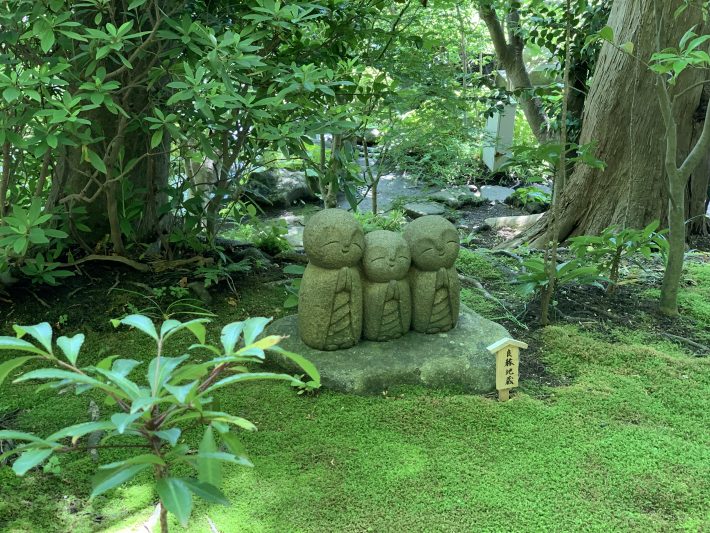 Thirteen students from Texas State took an adventure to Kamakura on their fourth day of the Japan study abroad trip.

I found Japanese culture to be very eye opening. When we visited  Hasedera Temple, I saw lots of beautiful things from the sculptures of Buddhas to the hydrangeas. Everything was placed purposely within the temple and was honestly some of the most beautiful sights I have ever seen. Although I did break my cell phone, I was able to capture some photos that will last me a lifetime.

The sun was out and shinning bright on the temple this beautiful day in Japan. There were many different areas of attraction; Amida-do Hall, Daikoku-do Hall, Inari-sha (Kakigara Inari), Brenten-do Hall, Benten-Kustsu Cave, Kyozo, and Jizo-do Hall.  The two that stood out the most to me were Jizo-do Hall and the Inari-sha.

Jizo is a Buddhist saint who saves people and is believed to protect children. The tour guide explained that visitors come and pray for healthy childbirth and prosperity. This area was filled with small Jizo statues. They were literally the cutest little statutes ever!

The Jizo statues are placed there to comfort mothers and the souls of  miscarried and deceased children. The reason why this stood out to me is because I remember my mother telling me that she had a miscarriage and how much of a burden it was on her because she felt alone. So, when the opportunity came, I decided to do the ritual of pouring water over the statue of a Jizo statue representing a miscarried child. I just could not stop thinking about how comforting it would be if we had something like this in the states to let the mothers know that they are not alone and that the child would not be forgotten. 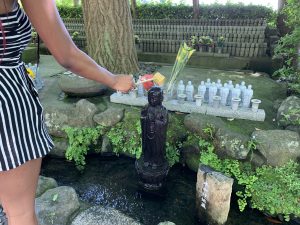 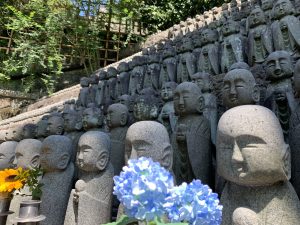 There was also this wall of hundreds of kakigara (Japanese for oyster shells) that instantly caught my attention. This area was called Inari-sha, which was originally dedicated to the god of cooking, stove and fire, Kojin. Legend has it the Kannon Statue appeared floating on the ocean by the guidance of kakigara attached to the statue on June 18.  This Inari-sha was created to enshrine the Kakigara and to receive divine guidance to enshrine. Once I entered the red torii  (gate), I could see all of the shells had some type of writing on them.

I looked over to the center of the display and saw that I had a chance to write a wish on a Kakigara at a low price of 100 yen. I mean I guess they have to make their money from tourists some how. So I did just that and wrote my wish down in marker and placed it on the highest hook I could reach.  I enjoyed this because I was able to write my wish down on a shell and hang it on the wall of wishes. It was a nice sight to see and to read other shells. Lots of people wished for happiness and a healthy life. It was a very beautiful sight. 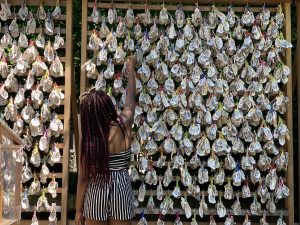 These areas stood out the most to me, and it was very humbling. I am extremely blessed to be able to experience these places and absorb the culture. If I could reverse time and experience these sights again, I definitely would.